We've transitioned to remote work in response to COVID-19. Questions? Email us.

The Two Corners of Unsolicited Redesigns

This article was originally Published on Medium

Like most overly obsessed Apple fans, I watched the 2013 WWDC keynote live, sharing a screen with my Twitter stream. The opening was a predictable recap to get the audience up to speed and announce small updates. Then we were told about Apple’s latest innovation, a cylinder-shaped MacPro. Twitter lit up with approval.

As exciting as the MacPro update was (it had been a while), we were still on the edge of our seats. The design community, and especially those who I follow on Twitter, were interested in one thing—the iOS 7 design as reimagined by newly named director of Human Interface design and famed product designer, Jony Ive. Finally we were there. Following a short introduction and overview of iPhone stats and highlights, Tim Cook passed to a prepared video with Ive to introduce us to iOS 7 and the annoyingly coined, new flat design.

“With what we’ve been able to achieve together, we see iOS 7 as defining an important new direction, and in many ways, a new begining.”— Jony Ive

Twitter lit up with approval. And disapproval. And anger. And confusion. And then dissaproval of the anger and confusion. Perhaps the best tweet came from Wilson Miner, “’Polarizing’ indeed.” Outside of those who hang in the middle, we tend to see the same thing happen every time a controversial design is released.

We see designers run to their corners.

On one side, wearing the blue trunks, we have designers who believe the subpar work they’ve seen should be redesigned by the community, to show how easily improvements could be made. In the opposing corner, wearing the almost-unnoticeably-lighter-but-they-swear-the-color-is-a-different-blue trunks, we have the (mostly more established) designers who believe these unsolicited redesigns are both unwarranted and unbeneficial.

It All Starts Innocently

Some of the folks who watched iOS 7’s unveiling in horrified astonishment opened their copies of Photoshop (definitely not pirated) and launched the Teehan+Lax iPhone 5 template PSD (slow bastards hadn’t released the iOS 7 template for another day). Within hours, redesigned versions of icons and complete screens appear in the wild and began to spread on Twitter. 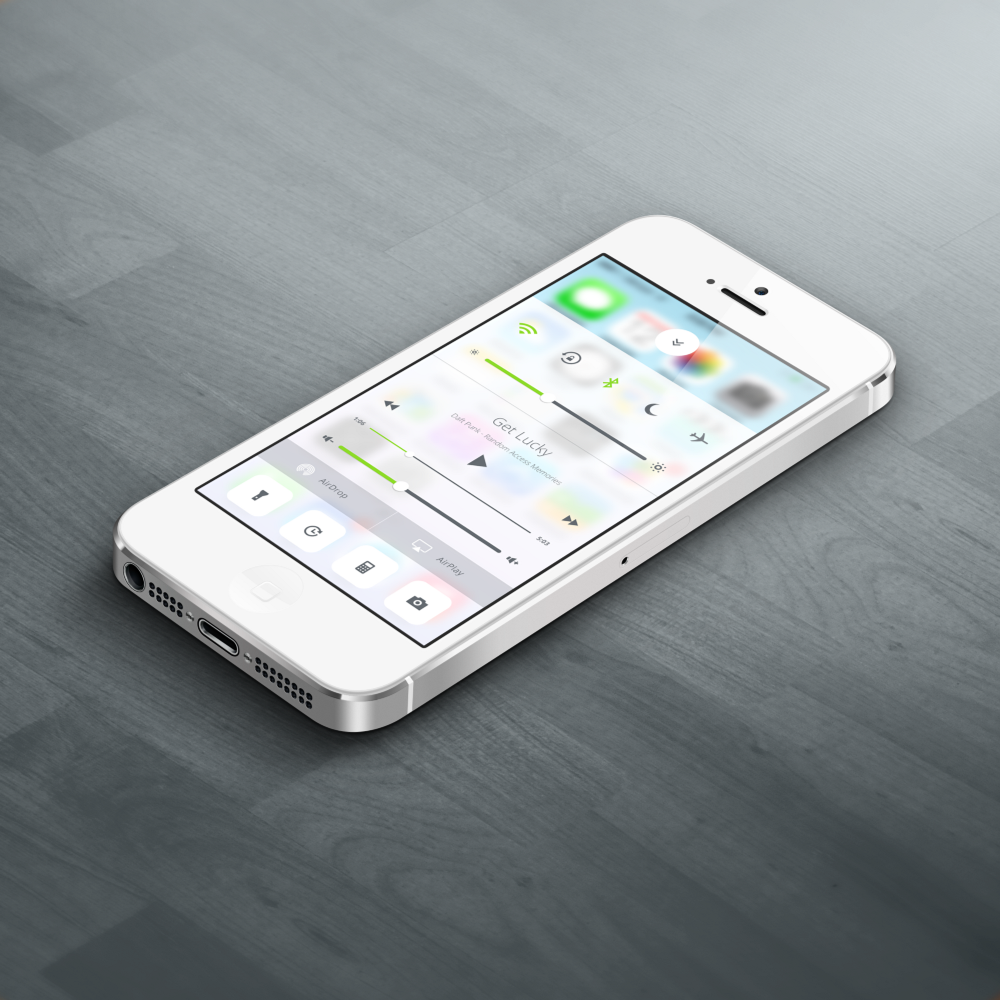 Most redesigns started on Dribbble—the number one resource for unsolicited redesigns. Featured above is a beautiful version of control center by Sam Nissinen, which is one of many, many redesigns posted to Dribbble.Seriously, there are an unbelievable amount of these. They pretty well hijacked Dribble for a few days, which has become common practice when major design overhauls are announced to the public.

Most of the mockups are stunning. Do they take into account the thousands of factors Apple designers had to consider while making the icons, control center, and lock screens for iOS 7? Absolutely not, but they’re still pretty, and that grabs the attention of designers around the world. As of writing, the number one redesign post on Dribbble is by Leo Drapeau, with 2,472 likes and 1,104 shares on Twitter, Facebook, and Pinterest. That’s quite imCompany Newsive for a mockup completed within 24 hours after Apple’s announcement. However, likes and shares can be achieved by many top designers without actually solving a single issue outside of window-dressing, which opens the door to the other corner’s rebuttal—what exactly are these designers trying to solve? Mike Monteiro, designer and guy who complains on twitter a lot, spearheads the fight against unsolicited redesigns, tweeting:

“To designers posting mockups of what you think iOS 7 OUGHT TO look like, I assume you’re good with clients doing this to your work as well?”—@Mike_FTW

“Let me stop you right there, son. That iOS 7 redesign you’re working on is NOT better. And you have other things to do.”— @Mike_FTW

Mike wasn’t the only person to call out the flood of redesigns hitting Dribbble, but he’s a popular guy, so he garners a lot of attention. Although Mike has made his opinion of unsolicited redesigns public on more than one occasion, I reached out to him to get an answer to the question of why.

Why Do You Take Issue with Unsolicited Redesigns?

1. You have no idea what the brief was.

2. A designer’s hardest job is selling their work to the people who need to approve it.

3. You never throw another designer under the bus.

Anybody can do something that’s visually appealing, post it to Dribbble, and get a favorable response. But that’s not what design is. Design is the solution to a problem within a set of constraints. And unsolicited work ignores the biggest constraint of all: your ability to get your work through the approval process. That’s not design, it’s jerking off in a vaccuum.

While Mike talked about why he loved iOS 7, some established designers, such as Erik Spiekermann, were outspoken on what they thought sucked about it. Erik’s initial critique was centered around the use of Helvetica Light, which he tweeted the day of the iOS 7 announcement.

“Wish someone at Apple knew that one should track light typefaces to make them more legible.”

Given Erik’s disagreement with iOS 7’s typography, as well as a few other design decisions, I wondered if his opinion of unsolicited redesigns would differ from Mike’s.

What is your take on unsolicited redesigns?

I firmly belive that most projects cannot be designed without the client’s involvement. There may be cases, however, where common sense or collective experience may give us enough information to come up with a better solution. That could apply to IRS forms, public signage — all those things that almost any designer with half a brain could improve. But commercial projects should not be honoured by solving them for free. We cannot possibly know all the constraints and usually end up making something pretty but pretty irrelevant. Designing something without knowing everything about it perpetuates the existing prejudice about designers just making things pretty superficially.

Do you think there are benefits to young designers posting redesigns on Dribbble?

They get practise and exposure but will ultimately just throw away their talent. If you’re a graphic window-dresser, this may be fine. If you consider yourself a problem-solver, see above.

These answers lead to a new question. A question to those posting redesigns to Dribbble. Are these posts meant as practice and to gain exposure, or do they believe these designs are actually solving a problem Apple was unable to solve?

I contacted many designers who contributed to the iOS 7 redesigns on Dribbble, ranging from icon adjustments to entire screen designs. Sam Nissinen, who redesigned the control center screen along with the Safari icon, provided answers that both explain what he hoped to accomplish and why he thinks unsolicited redesigns are a positive response for the community.

What were you hoping to accomplish with your redesign?

To be perfectly honest, I saw the control center as a unfinished design, and wanted to put my design skills to the test. Subconsciously I might have also been thinking about the possibility of Apple actually seeing the design. I have a feeling that they will be tweaking parts of iOS and if they do, it would be interesting to see how my version fares with their possibly upgraded one.

Do you think your version could be implemented by Apple?

I did take a few liberties with the design, but with some tweaks, I don’t see any reason why it couldn’t be implemented into iOS 7.

What would you say to people like Mike Monteiro who believe it is wrong to redesign other people’s work unsolicited?

I dont think using clients as a comparison is very fair. Apple has formed a huge part of their brand with good design, and if they fail to deliver in the eyes of the design community, the community will start taking action in the form of redesigns. This is comparable to politics where a party would take a stance to something proposed by the parliament, in this case the party being the community of designers and apple the “parliament of design”. These redesigns are simply a result of Apple not delivering something that the lot of designers would consider excellent. Nevertheless, I believe redesigns are like playing cover music or creating remixes of songs, it’s a great way for a designer to skill up and also feeds alternate views on design decisions. In my opinion there are only benefits to that.

Outside of believing these designs could be implemented with just some tweaks, Sam seems to understand the purpose of his redesigns. In Sam’s opinion, designers are providing feedback to a company that, if the past is any indication, will be a force in driving design trends and direction for years to come. If the designers creating these unsolicited redesigns truly understand their lack of information, client direction, pitches, revisions, and general process, what is the harm of throwing up a redesign that looks better than what Apple has shown?

My guess is that many of the designers behind unsolicited redesigns have not been in a room with a client that hated a certain shade of blue. Or an art director that, after 20 minutes of arguing your point, demanded the padding in that icon follow the established grid. Or being put on a team where usability and customer feedback outweigh what every designer in the group agrees looks best. These situations exist and they require skills outside of Photoshop and Illustrator. Design is problem solving, design is communication, and design is selling your work. When we, as designers, confuse the public by briefly saying design is simply window-dressing when we’re unsatisfied, we’re providing a disservice to ourselves. A proper response would be to explain why Apple’s icon design is wrong by putting yourself in the shoes of the designer, rather than taking a few minutes to adjust visuals without a lot of additional thought.

For many designers there is a turning point where design changes from making things pretty to making things work. It is at this time in a designer’s career that unsolicited redesigns start to make a lot less sense.

We’ll keep you up to date on our latest articles and insights. Sign up for our newsletter:

100 Days Remote: Making it Work While We Work at Home

100 work days later, here's how we've adjusted as best we can to the new abnormal.

We're looking for a web developer!

You’re a web developer who can business-in-the-front-end, party-in-the-back-end with ease, and you’re looking for a new opportunity at a growing company in Springfield, Mo.

COVID-19 has disrupted "business as usual." We’re here to help with these 5 tips to make sure your business is up to baseline across your digital channels.

Let's get to work.